What My Favourite Witch Movies Taught Me About The Craft

Aside from religious bodies, the media and pop culture has created some serious misconceptions about witchcraft and magic, and this is especially shown in horror movies where witches are the cause of evil. Through this, society believes that whatever can be associated with the occult can only be dark and therefore evil. Then we have movies such as The Wizard of Oz, Hocus Pocus, Harry Potter and many more, which give a more pleasant twist to witches and wizards, with the exception of Hocus Pocus, where the three witches are still the villains but the humorous tone of the movie milds down the darkness, but again they focus on misconceptions about witches, a stereotype of potions that glow, wands that spit fire and lightning, a witch with green skin and many more popular myths.

There have been many posts talking about pop culture and how they portray witches, voicing our concerns and anger, and therefore this won’t be one of these posts. We usually focus on how the media focuses on the bad side of the craft, but is that always the case? As the saying goes: “There’s a truth in every lie”, and I want to talk about those little truths that creep in on the screens in our homes.

What I want to mention is the movies about witches that, even though they do have an element of fantasy and unrealistic magical powers, they can still teach us a thing or two about witchcraft and magic and provide us with valuable lessons we can use in our practice.

In my experience, I have learned a lot watching these movies. Not having a teacher from day one to direct me through my journey, I turned to what was available. Aside from the books I’d read, I also used entertainment to see the truth in every little lie shown on my screen and learn from it. Certainly those little truths within the lies and fantasies have helped me to grow as a witch and as an individual.

I am sure this would be one of your witchy movies that would pop in mind if someone asked you to recommend them one of this nature. 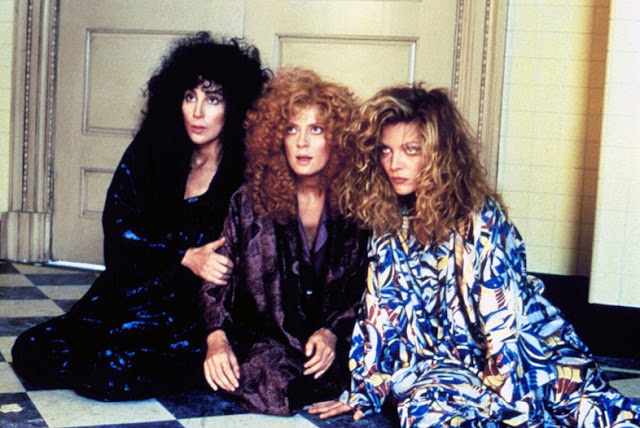 Aside from excellent casting, I appreciate the emphasis of the movie on the thought witches have and how they can materialise if they focus enough on that thought. Something we call as ‘manifestation’. When Alex, Jane and Sukie come together for a drinks-at-home night and they visualise of the perfect male, they don’t know that at that same time they are manifesting the man that they are describing and focusing on.

I personally have experienced something similar, when I have made a thought, put enough energy into it only to realise it materialised. However, when these three witches realise that they need to get rid of this perfect man they brought in their lives, it gives us a moral message of “Be careful what you wish for” or in this case “Be careful what you think of”.

Thoughts can be real and they can manifest. You might think that they are just thoughts, or you might dismiss them immediately, but if your feelings at the time you are having that thought are strong enough, those feelings might be enough energy to manifest that thought and bring it into your life.

A personal favourite movie about magic and witches is Practical Magic. Aside from the great casting, the movie portrays witches as powerful women who all they want is to be accepted by others and lead a life where they are accepted by the rest of the people and still embrace their divine selves.

When Sally and Gillian accidentally kill Gillian’s vicious boyfriend, they try to bring him back to life, only to end up bringing back someone who should not have returned. He came a little bit different and a lot of trouble. I have heard many witches say “Do not conjure what you cannot banish”, and I feel the movie describes a situation where this advice would be based on.

What captured my attention the most, however, was Sally’s explanation of magic to Gary, the policeman investigating the death of Gillian’s (late) boyfriend. When Gary voices people’s rumours about the family of witches in the village she replies “No, there’s no devil in the craft”, then when Gary asks her what kind of craft she does, she replies

“Magic isn’t just spells and potions. Your badge… This is a star, just another symbol, your talisman. It can’t stop criminals in their tracks, can it? It has power because you believe it does.” (Video of the scene in this link)

I wouldn’t have been able to explain witchcraft to someone better than this movie has, and the way they portray witches if probably why this movie is one of my all time favourites.

The Craft was one of the movies that have sparked ideas to me on how to perform my spells. As someone who follows a more eclectic path, it was a little bit challenging to find spells that didn’t necessarily fit the standards of the traditional Wiccan path, or any other traditional path in fact.

From the casting of the circle chant they use, to the binding spell Sarah uses to bind Nancy, I have used some of those ideas to improve my practice which is more eclectic and focusses on manifesting energy for each purpose.

My absolute favourite idea I adopted in almost all my spells, is when Sarah starts each of her intended spell with “By the power of three times three”. Three is a divine number and when it’s multiplied with itself it equals with nine, the magical number. I found it to be a genius idea to use numerology and intent in chantings within each spell.

The Craft also gives a great advice, by showing Nancy abusing the power she has manifested by invoking Manon. As witches, the more we experience, the more we discover our capabilities, and our spells prove to us that we can do anything we like with them, however, it is easy to get sucked in the success of each spell and abuse that power. We have to remember, that this power is not ours, it sources from somewhere else, we are just given the opportunity to use that energy and direct it, and so the movie’s moral to not abuse this power can be a great lesson to every witch.

AHS’s third season was a very current take on witches, and even though I appreciate that the directors tried to stick to the real stories of witch trials in the 17th century in America, there are some facts they may have gotten wrong, however, this is not the post that I point out these inconsistencies, but what I have learned from this season. And I am sure that even though we are all greatly disappointed that we can’t perform any of the seven wonders (with the exception of divination), I can safely say that this season has empowered witches throughout the world, with just simple quotes such as:

When Fiona Goode, the Coven’s Supreme (or the High Priestess as she would have been called in any real life coven) used this mantra that we can all relate to:

When Cordelia said “When the world sees a wall, we see a window”, to empower Quinn to manifest her power and use it.

When Cordelia Lost her sight but that didn’t stop her from using her powers as a witch, she said “I had to go blind to be able to see” (or something along those lines)

Honorary Mention: All Souls Trilogy (A Discovery of Witches)

As a lot of you who know, this may not be a movie, it is, however, my favourite trilogy about a witch called Diana, named after the Roman goddess, who denies her path as a witch, however, she can’t escape her truth. She meets a vampire, they fall in love and I will not be mentioning the rest so as to not spoil.

This trilogy will also be coming out on TV in fall 2018, and I am extremely excited about.

Deborah Harkness, the writer of the trilogy, made an amazing job on writing about witches as even though they have the typical ‘chanting some words and they come true’ kind of spell, she portrays witches as pagans, who believe in different deities and use their gifts.

The story of Diana teaches us that we can’t deny our nature, if we do, it will force its way into our lives, because it is part of us. If, however, we embrace it, we can develop our lives and divine self even further.

Mirror Mirror on the Wall

Spell for the New Year: The Nine Knots for Luck and Prosperity

How Hoodoo Brought Me Closer to my Roots

By continuing to use the site, you agree to the use of cookies. more information